The Army Drum and Fife Book

In early 1861, the South seceded from the Union and set up a provisional government with Jefferson Davis as president. On March 4, Abraham Lincoln was inaugurated as President of the United States. Less than a month later, South Carolina fired on Ft. Sumter. Thus began the War Between the States.

Soon afterward, an advertisement placed by the Oilver Ditson Company, music publishers, began to appear in various periodicals, along with other news of the war:

The Army Drum and Fife Book, 73 pages in length, is also known as the Army Drum Book and The Modern Drum School. The first unit of 5 pages, deals concisely with the Elements of Music, describing signatures, notation, time and meter, major and minor scales, and transposition. The next unit, from page 11 to 64, is named the Modern Drum School. It discusses Double Stroke Roll, Single Stroke Roll, the Tap, the Flam, the Ruff, the Flamadiddle, the Side Flamadidle, Five Stroke, Seven Stroke, Eight Stroke, Nine Stroke, Ten Stroke and Eleven Stroke Rolls, all with proper musical notation. Next are Single and Double Drags, followed by various calls: Drummer's Call, Band Call, To the Colors, Assembly, and the General. Next are four pages of practice exercises. Single, Double and Flam Paradiddles come after that, and then more calls: Field Officer's, Sergeant's, Corporal's calls, and Cease Firing.

At a point less than half way through the book, the fifers get involved. Tunes are all scored in over-and-under format, with the fife music above: Hail Columbia, Yankee Doodle, Star Spangled Banner, Washington's March, Red, White and Blue, Our Flag is There, Hail to the Chief, Marseilles March, Wood Up, God Save the Queen, Sultan's Polka, Dead March in Saul, Road to Boston. The Reveille follows, composed of Three Camps, Slow Scotch, Austrian, Hessian, Kinloch, Double Drag, Quick Dutch, Larra O'Brien, Dawn of Day, Quick Scotch, followed by Three Camps again, with both fife and drum parts.

Bear in mind that most of this music has parts for both the fife and the drum, in over-and-under format. Tooters and hide-beaters can literally read from the same page. The last section is Ditson's Buglers Call Book, with 49 selections.

Drum Instructors: Please note that this is probably the finest book from the period for teaching rudimental drumming to new students, bar none. 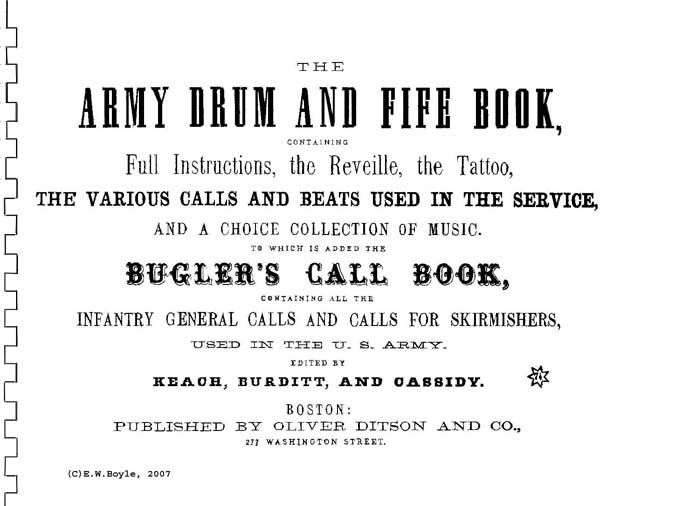