At a Civil War reenactment this summer, I heard a young fifer expounding about where the reel, Rakes of Mallow, came from. He said that the mallow plant, which grows in the British Isles, is used as the flavoring for marshmallows and other confections, and the song is about raking in the plant in for use in such flavoring. The story sounded very familiar to me. I had heard it myself many years ago when I was growing up in Connecticut.
What he said about the mallow plant being used as a flavoring for marshmallows, not only in the British Isles, but also in the American colonies, is quite true. One species of mallow, Althaeia officinalis, was used for that purpose, although it isn't any more. I guess artificial flavoring has been developed as a substitute. It was also touted for upper respiratory disorders, stomach troubles, skin disorders, cuts, burns, varicose veins, dental problems and whatever else ails you. As interesting as this may be, dear reader, it has nothing at all to do with the song we know and love.

Located near Cork, in Munster, Ireland, the town of Mallow has a long history. In the year 1185, during the reign of King John, the first foundations for Mallow Castle were laid. A new castle was built in 1282 and the town grew up around it. In 1724

a warm spring was discovered to have "curative properties" and a spa was built where visitors could partake of the waters, which ranged in temperature between 66 and 72 degrees Fahrenheit year round. Visitors from throughout Ireland and England drank the waters and bathed in them. Mallow was a major resort between 1730 and 1810. A ballad of the period, published in 1753, praises the water's curative properties:

Ye Nymphs deprest
With want of rest
And with complexion sallow,
Don't waste your prime
With chalk and lime,
But drink the springs at Mallow.

All you that are
Both thin and bare
With scarce an ounce of tallow,
To make your flesh
Both plump and fresh,
Come, drink at springs at Mallow.
For all that you
Are bound to do,
Is just to gape and swallow,
You'll find by that
You'll roll in fat,
Most gloriously at Mallow.

Or if love's pain
Disturbs your brain
And makes your reason shallow,
To shake it off
Gulp down enough,
Of our hot springs at Mallow.

Ye ladies fair
Who want an heir,
Whose fruitful fields lie fallow,
Leave spouse at home
And hither come
To drink the wells at Mallow.

The antiquated term, "rakehell," or "rake" for short, applies to someone who is so debauched, so sinful, so irresolute and immoral that he will probably some day be found raking the coals of Hell itself. Apparently, when they weren't drinking the water from the Spa House for its curative properties, some young male visitors were guzzling, in vast quantity, other substances that had exactly the opposite effect. It is to them that the fife, fiddle, and bagpipe tune, first published in 1741, is directed: 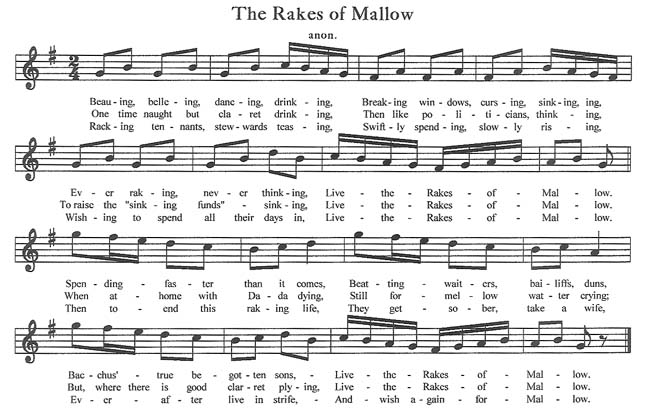 It has nothing to do with marshmallows!